This stylish luxury apartment is situated in the heart of Rome, on the chic Via Condotti. At the end of the narrow street sits the Spanish Steps, while the famous Piazza del Popolo is only minutes away. It would certainly be hard to find a better base in the Eternal City than this luxury home in Rome.

In a city obsessed with designer fashion, Via Condotti is the epicentre of chic; most of the world's leading designer and jewellery brands have showrooms here. During a stay in this luxury home in Rome, you can be browsing in Prada or Cartier one moment, and sitting on the Spanish Steps eating a gelato the next.

The two-bedroom luxury apartment enjoys a prime location on the fourth floor of one of Via Condotti's most attractive old buildings. Naturally, it has been furnished to the highest standards, and in a manner that reflects its style-conscious surroundings. The walls are all painted in a crisp, clean white which gives the space a light and airy feel. Dominating the living area are contemporary prints of Jan Van Eyck's 'Man in a Red Turban' and Raphael's 'The Woman with the Veil'. On the beautiful wood floor is a statement black and white striped rug.

The monochromatic theme continues in the bedrooms: one has two quirky Piero Fornasetti print cushions, the other a giant black and white photograph.

The charming apartment benefits from a Juliet balcony offering views not just of the designer shops below but the Spanish Steps at the top of the street.

From this perfect base you can reach all of the city's iconic sights - the Trevi Fountain, the Colosseum and St Peter's Basilica, to name but three. But don't miss out on some of the city's lesser-known gems, such as the cimitero acattolico, the 'grotesque' church of Santa Maria della Concezione, and the Roman villas at Domus Romane di Palazzo Valentini. 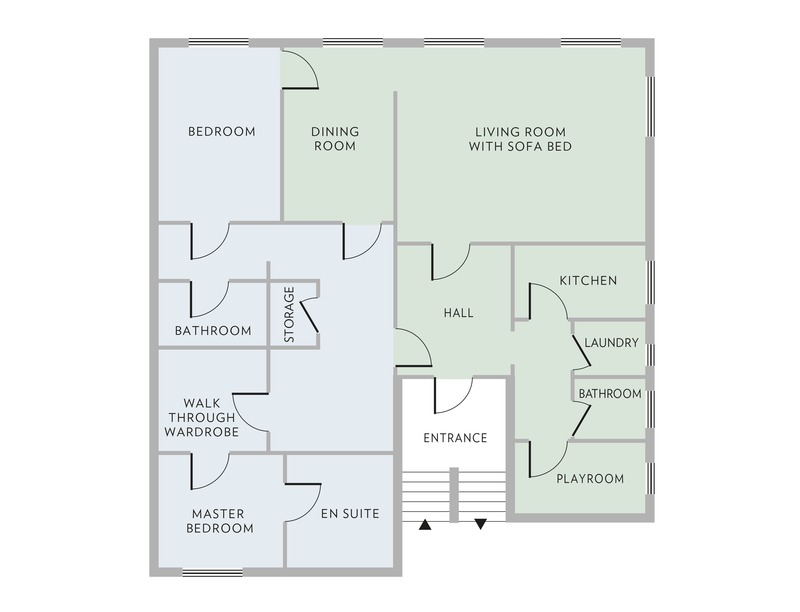 “The apartment's location is unbeatable, everything is just a few steps away yet once you close the door behind you escape the hustle and bustle of busy Rome. Book well in advance to visit "La Pergola" Restaurant - the highest rated restaurant in Italy.”

“The location of the flat is excellent and you can walk to attractions in Rome, and you are also very close to the shopping areas. Lovely to start your breakfast looking up to the Spanish Steps.”

“The location of the flat is fantastic.”

How to sum up in just a few words a city that was once the capital of the world - and which still offers more ancient monuments, museums, galleries, shops and restaurants than virtually any other capital in the world?

Via Condotti is also a destination in its own right. While millions of tourists descend upon Rome's ancient attractions, this is where the Romans come to indulge their passion for designer labels and upmarket brands.

You may also enjoy these properties

INVESTMENT IN THIS SCHEME IS RESTRICTED TO CERTIFIED HIGH NET WORTH INDIVIDUALS OR SOPHISTICATED INVESTORS. EVIDENCE OF THE CERTIFICATION WILL BE REQUIRED BEFORE DETAILED INFORMATION CAN BE PROVIDED TO YOU. THE PRICE OR VALUE OF, OR INCOME FROM, INVESTMENTS CAN FALL AS WELL AS RISE. THIS INVESTMENT CARRIES A RISK TO YOUR CAPITAL AND AN INVESTOR MAY GET BACK LESS THAN THE SUM INVESTED. YOU MAY HAVE DIFFICULTY SELLING THIS INVESTMENT AT A REASONABLE PRICE AND IN SOME CIRCUMSTANCES IT MAY BE DIFFICULT TO SELL AT ANY PRICE. DO NOT INVEST IN THIS UNLESS YOU HAVE CAREFULLY THOUGHT ABOUT WHETHER YOU CAN AFFORD IT AND WHETHER IT IS RIGHT FOR YOU. ‘ THIS FINANCIAL PROMOTION HAS BEEN APPROVED BY VELAY FINANCIAL SERVICES LIMITED, 210 NEPTUNE HOUSE, MARINA BAY, GIBRALTAR WHICH IS LICENCED BY THE GIBRALTAR FINANCIAL SERVICES COMMISSION AS AN EXTERNAL ALTERNATIVE INVESTMENT FUND MANAGER UNDER THE ALTERNATIVE INVESTMENT FUND MANAGERS REGULATIONS 2013 (LICENCE NO. FSC0103AIF). THIS INVESTMENT IS NOT BEING OFFERED TO (1) ANY PERSONS RESIDENT OR LOCATED IN THE UNITED STATES OF AMERICA; (2) ANY UNITED STATES CITIZEN WHO IS STATIONED OR SERVING OUTSIDE THE UNITED STATES AS A MEMBER OF THE US ARMED FORCES OR DIPLOMATIC CORPS OR ANY OTHER GOVERNMENTAL AGENCY EITHER AT THE TIME OF OFFER IS MADE OR WHEN THE PURCHASE ORDER IS INITIATED.